Out with Inflammation = Out with Gout

An article in a recent trade publication opened with the following: “Charles couldn’t believe the intensity of the pain – and he had been shot during a tour in Iraq with the Marines. “I was lying in my sleeper and my big toe just went on fire. It was like nothing I had ever experienced. I thought I was going to pass out from the pain,” Charles explained. “My big toe was red, swollen and when I touched it, even a little, it hurt like hell”. Charles’ problem is that he suffers from gout.

Gout is a type of arthritis that seems to run in families and results from the presence of crystals that form in the body. For example, during digestion and metabolism, the body produces uric acid which is eliminated via urine. Any uric acid that the body cannot excrete accumulates in the blood. For reasons not understood, about 30% of people with high levels of uric acid in their blood form needle-like, sharp urate crystals that end up in their joints and/or other parts of the body.

Herbert Baraf, MD, Chevy Chase, MD, has a great analogy: “Imagine pouring packets of sugar into a glass of tea; can only hold so much in solution. And sooner or later, the sugar is going to start accumulating on the bottom of the glass.”

People with gout may go weeks or months without an attack, but when it flares up it can be excruciating and last for days. Over time, repeated attacks can eat into bone and cartilage, causing permanent damage to affected joints.

The presence of crystals triggers an intense inflammatory response and painful swelling the result of the body’s attempt to break down the crystals. Typically the crystals end up in joint cartilage, and for unknown reasons, especially the big toe. 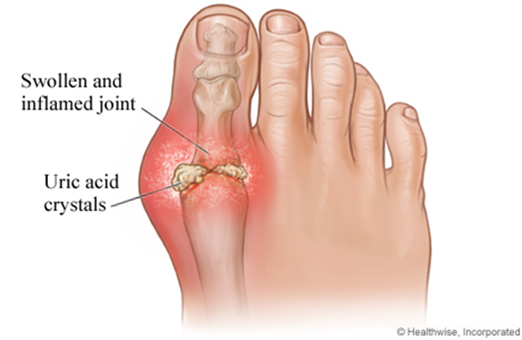 In others, crystals settle in kidneys or the urinary tract, impairing their function or forming stones. White blood cells migrate into the joint spaces and fluids and the lubricating membranes that line the joints, the synovial membranes trying to eliminate the crystals. The immune cells attracted to the area release biological factors, cytokines and chemokines, into the surrounding area. This attracts more inflammatory cells with a result of redness, swelling and debilitating pain.

Certain immune factors are typically only in small amount in normal uninflamed joint fluids, but in individuals undergoing a gout attack (flare) the levels of the factors are significantly increased.

Since inflammation is associated with many diseases, such as cancer, diabetes, obesity and cardiovascular health, it is not surprising to find that patients with gout are at higher risk of these diseases when compared to the general population.

Gout is caused by an overactive immune system using inflammation unsuccessfully to get rid of the crystals that are causing the discomfort.

Returning the immune system to balance, immune homeostasis, can result in a higher level of quality of life (QOL) for people with gout.

For years I have helped people promote  joint, digestive, energy and overall health.   Feel free to contact me DrHellen@DrHellenGreenblatt.info, use the form, or give me a call at 302.265.3870 (ET) and let us talk. Let me help you help yourself, it is  time!

You can follow any responses to this entry through the RSS 2.0 Responses are currently closed, but you can trackback.