Lupus and the Inflammatory Process

What is the Role of Inflammation?
When the body is injured or recognizes the presence of pathogens such as bacteria, viruses, molds, parasites or cancerous cells, its immune system is triggered to respond with inflammation to “burn” the threat out of the body.

Balance is Essential
Once the challenge has been met, a person in immune balance, homeostasis, will reduce the amount of inflammation that they are producing to “normal” levels. Uncontrolled, run-away  inflammation leads to autoimmune diseases (against oneself) in which its own tissues and organs are attacked.

Lupus
Systemic lupus erythematosus (SLE), lupus, is a complicated autoimmune condition affecting virtually every organ in the human body. Because of the wide-range of symptoms experienced, the disease is often difficult to diagnose. Common symptoms are extreme fatigue, swollen and/or painful joints, muscle pain, low-grade fever, thinning or loss of hair, butter-fly shaped rash across the nose and cheeks, chest pain when taking a deep breath, kidney and heart problems. 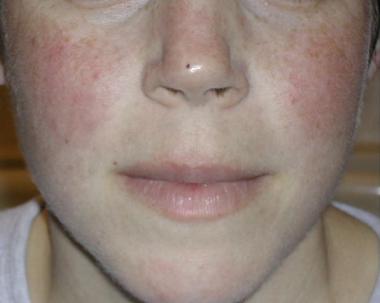 Females make up 80-90% of people with lupus and despite treatment, many individuals will experience flares and remissions (symptoms come and go) their entire lives.

Lupus and Inflammation
The hallmark of lupus is over-activity of the immune system and inflammation. Imbalances of inflammatory immune factors, cytokines, are significantly higher in lupus patients compared to people without lupus. These immune molecules promote inflammation and damage tissues.  High levels of these inflammatory factors are associated with the severity of disease but decrease as individuals are successfully treated.

Anti-malaria medications originally used to prevent or treat malaria has been used to treat lupus.It was not understood why these medicines were somewhat effective against SLE, but a recent study suggests that these medications inhibit inflammation.

Physical Activity
Every time a muscle contracts, it releases anti-inflammatory molecules that helps the body balance the amount of overall inflammation produced.

As would be predicted, weekly physical activity improves fatigue, depression and increases the quality of life of most individuals. Even moderate exercise, 3 days a week for 20 minutes, has been shown to make a major difference in the amount of energy and feelings of well-being experienced by lupus patients.

If  You Have Lupus
Frequent physical activity, eating in a healthful manner and daily consumption of an excellent immune balancing supplement helps the body control inflammation and achieve immune homeostasis (immune balance).

Dr.Hellen is passionate about helping people enjoy life at its fullest. She may be contacted by using this form, contacting her at: drhellen@drhellengreenblatt.info or feel free to call her at:  302.265.3870 (ET, USA).

Posted on by in Immune Homeostasis (Immune Balance) | Inflammation

A properly functioning immune system protects the body against infections by bacteria, viruses, fungi and other pathogens, and helps it heal. When our bodies detect a threat, or a stimulus that is “perceived” to be a threat, it orchestrates a delicate but highly aggressive immune inflammatory response to meet that threat.

There are two initial phases of immune responses:

Inflammation is a complex event during which immune cells migrate into an area in response to various immune factors. These messages, such as cytokines, are used to to communicate and coordinate an organize attack against pathogens, or to help the healing process. After the threat has been resolved, other immune cells come in to carry away dead organisms and cells, and start the repair process.

In such cases, the immune system is “over-responsive”; it is unbalanced, out of homeostasis. An over-active immune system leads to conditions where the body starts to destroy its own healthy tissue (e.g. diabetes, thyroid, lupus, multiple sclerosis, fibromyalgia, etc.) or it may lead to allergies and chemical sensitivities, or poor healing.

Many people have the mistaken impression that “boosting” immune function at all times is useful. This is simplistic. People with autoimmune conditions, such as those mentioned above, are already “over responding”. The last thing they need is to further “boost” their immune response, increase their autoimmune responsiveness.

Another example of “boosting” immune response is artificially increasing the level of natural killer (NK) cells within the body. NK cells often make up part of the body’s “early response”. “Boosting” numbers of certain white cells is unnatural and may cause other difficulties due to excessive numbers of these cells.

Additionally, other types of specific immune cells, for example those that play a role in protecting the body from infection, may promote miscarriage and premature births, when they are at higher than normal levels.

The lesson here is that all of our immune cells and their components have to be balanced, or in a state of homeostasis, for our body to naturally heal and protect itself.

There are a number of simple steps that one can take to return the body to homeostasis, including using recovery proteins, exercise, smarter food choices, and maintenance of healthier weights.